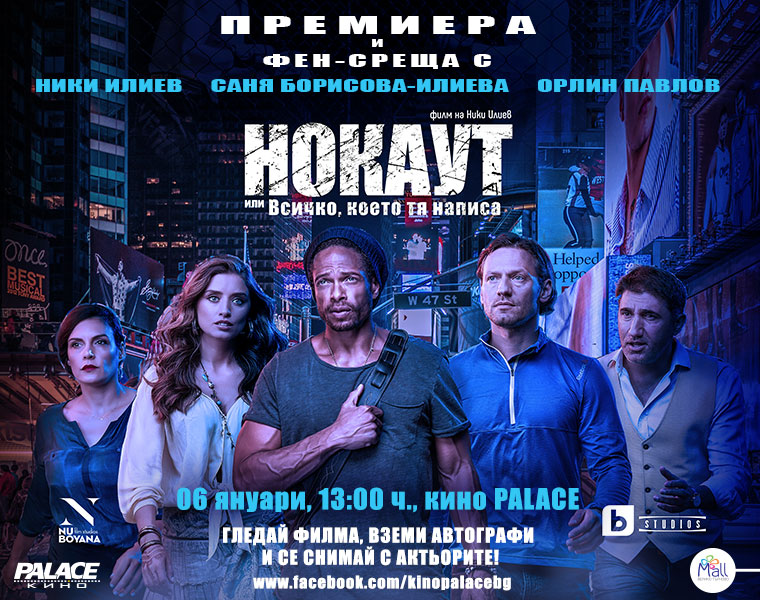 Niki Iliev's newest film "Knockout" will be presented in Veliko Turnovo by the director and two of the main actors - Sanya Borisova-Ilieva and Orlin Pavlov.

Do not miss the chance to watch the premiere of the movie on 06.01. (Saturday) at 13:00 at the Palace Cinema, with Niki, Sanya and Orlin, who will share with you their emotions during the filming and the finished production.

Tickets for the event can be purchased at http://kinopalace.bg/ or at the cash-desks at the cinema in Mall Veliko Tarnovo.

After the screening you will have the opportunity to take autographs from the actors as well as to take pictures with them.

More about the film and its plot: Aaron is a man at the end of his 30’s. Until recently, he commanded the boxing ring and became an MMA (mixed martial arts) world champion. However, the sport took its toll, leaving him with a noticeable mental impairment. Retired from the game and with most of his money spent on lawsuits, Aaron turns his music hobby into his new profession. Unfortunately fans find it difficult to bare the endlessly soft and outright boring music he sings and performs on guitar. Will anyone take Aaron serious, someone once idolized and no longer at the top of his game?

At a performance Aaron finds himself on stage with Bobby - a young man who translates Aaron’s lyrics in sign language for the audience. His presence is not accidental at all - an immigrant who came from Bulgaria with his twin sister (Jana). Bobby seeks his long-desired success as an MMA fighter in the USA. He knows sign language because Jana refused to talk until she was eight-years old.

Soon after Aaron bombs on stage he meets Bobby, who immediately sees that he and Aaron are on the same path to redefine themselves. Under the guise of matchmaker, Bobby introduces him to his equally challenged sister for Aaron’s “benefit.” He convinces Aaron to backseat his music career and return to the ring to restore his former glory by fighting him in Bulgaria - one of the few places in the world Aaron is not prohibited from boxing. However, Jana is not easily swayed by brother’s role as cupid. Despite some obvious chemistry between the two, they find themselves more at odds than falling in love.

The trio travel to Bulgaria and Aaron gets to see Jana in her native land, meet her parents and the local gypsies who became a surrogate family to her. She reveals that at early age in her native country her parents enrolled her in a school for mentally challenged children, also frequented by gypsies living in her village. Jana reconnects with her other family and it deeply impacts Aaron. Meanwhile, Bobby continues to fine-tune his plan, however, even the best-laid plans fall apart. Often with pain. Many times with humor. But always with surprises.